More than two decades ago, Jeff Bezos founded a website with the belief that a centralized online model would be better for consumers and his business than physical stores. That website, Amazon.com, started with books and over the years has become a one-stop shop for anything you could ever want. The result is the most powerful online retailer in the world and one of the most influential companies on the globe.

But as Amazon has evolved, it has recognized the importance of owning its fulfillment network and getting closer to consumers. That strategy was especially apparent last summer when Amazon purchased high-end grocery chain Whole Foods, which followed earlier moves to build its own fleet of trucks, planes and delivery vans. Just last week, it opened its first cashier-less Amazon Go store to the public (it first tested the concept with employees) – customers scan their phone upon entry, grab the items they want, then walk straight out.

The best way for Amazon to provide a better customer experience is to control its distribution network, and operating hundreds of physical stores works toward that goal. These stores act as forward fulfillment centers in its broader distribution network. That justified the $13.7 billion price tag for 473 Whole Foods stores, the largest cash transaction in Amazon’s history.

Enough time has passed since that groundbreaking transaction officially went into effect at the end of August for a more educated analysis of the purchase, the changes so far and Amazon’s future plans for its largest investment to date.

Amazon already has solid footing in the grocery and fresh goods industry. Their stated goal is to become the market leader in online grocery, but for the time being, Amazon Fresh and Amazon Pantry remain a small piece of the overall business.

Whole Foods provides the eCommerce giant with expertise in food storage, distribution and sales – it has more than 35 years of experience in the market. Bezos & Co. can learn from the operational processes that supported the grocer’s rapid growth during the ‘90s and early ‘00s to expand its market share. It can build a link between the convenience shoppers enjoy online with Amazon Fresh and its new network of brick-and-mortar stores.

Additionally, these stores are logical places to put Amazon Lockers. Customers can choose to have orders shipped to the locker at a nearby store, then pick up a laptop or new headphones ordered online after completing their weekly trip to the grocery store. Shipping to a locker may seem like an inconvenience. However, it eliminates issues like package theft or needing to be home to provide a signature for a package. The stores become one-stop shops for products that in the past would require multiple stops. These lockers double as drop-off points for returns of qualifying items.

The acquisition of Whole Foods drives new value for Amazon Prime customers, as well, with exclusive discounts and deals. Amazon hopes this will drive repeat business from its most engaged, loyal online shoppers who are part of its membership club. The benefits of a Prime membership have expanded dramatically over the years – from free two-day shipping to video and music streaming to discounts at the grocery store.

Amazon can democratize premium goods at Whole Foods. The store sells organic or natural products with a higher price point than other grocery stores, but it has the unique ability to drive down the price of these goods so more people can afford them. Its online business has followed a similar model by offering extremely competitive prices on everything – whether it’s books, personal electronics or furniture. They hope that leads to happy customers who will shop at Whole Foods and on Amazon.com more frequently.

Six months in, prices at Whole Foods have fallen by 1.1 percent, according to research firm Gordon Haskett. There are also offers exclusive to Prime members. For example, around Thanksgiving the store handed Prime members a discount of about 15 percent on organic turkeys. 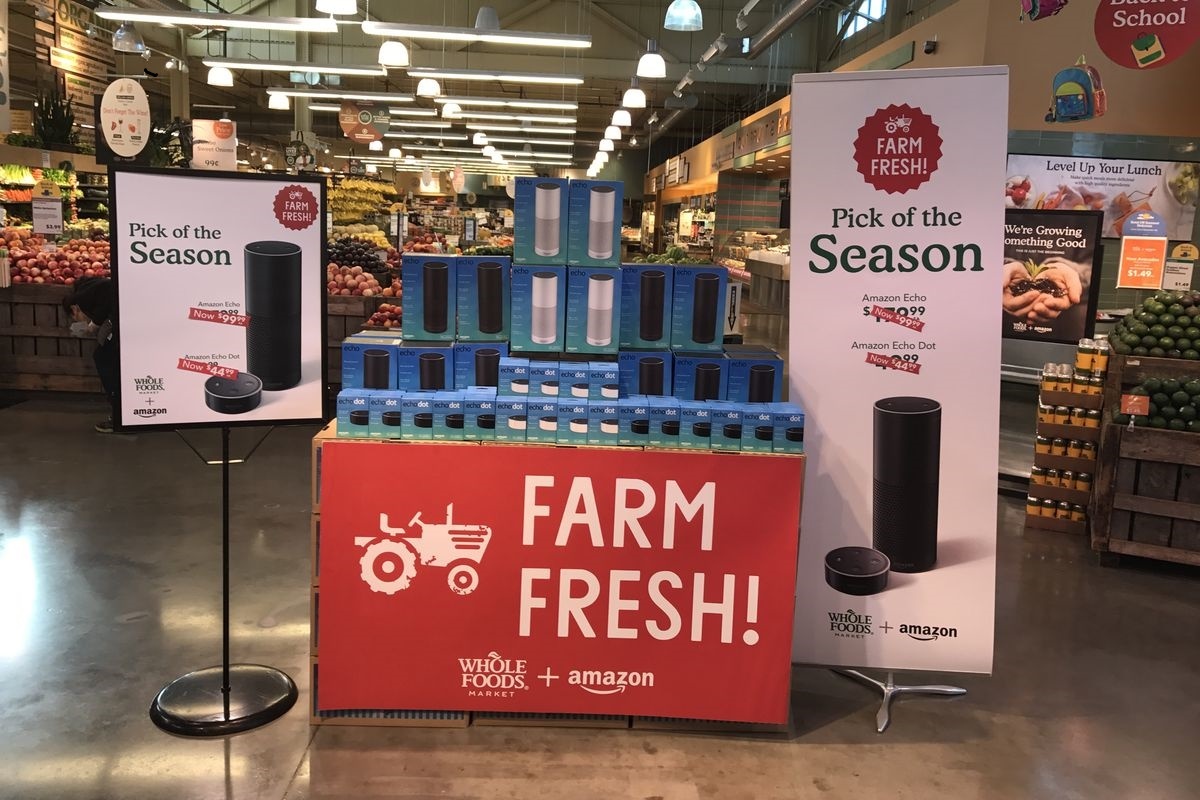 Amazon has also installed lockers at around 85 percent of Whole Foods stores, The Mobile Globe reports. Amazon devices like the Echo smart speaker, Fire tablet and Kindle e-reader are on display in stores, as well. It’s an easy way to open up a new sales channel for Amazon-branded products. And the online retailer is also selling its partners’ inventory in these stores, like wrapping paper during the holiday season.

The ultimate goal is to drive new purchasing patterns among Whole Foods customers. Amazon wants to make people comfortable buying groceries and electronics at the same time, for example. Stores are an ideal opportunity to test consumer behavior and the organization’s ability to change it. Amazon can collect additional data on consumers through in-store purchases, which will help it normalize these new patterns.

What’s coming down the road?

One of Amazon’s core values is “Customer Obsession.” Amazon believes that if it focuses on the customer rather the competition, it will naturally beat out competitors. That belief was a key reason for acquiring Whole Foods and will shape how Amazon treats this asset in the future. Again, the goal is to convert and converge these two customer bases to drive business online and in stores. Bezos wants to cement the value of Prime so it continues to add tens of millions of new members every year.

Adding Whole Foods to the portfolio demonstrates the organization’s commitment to operational excellence. Previously, Amazon purchased Kiva Systems (now Amazon Robotics), which manufactures robotic fulfillment systems now used exclusively by the top retailer. It holds patents for drones and flying distribution centers. The eCommerce powerhouse is even exploring anticipatory shipping, hoping that it can gather enough information about customers to know what they will want before they actually buy it.

Amazon Go helps the company work toward this goal of operational excellence, as well. The computer vision, deep learning algorithms, and sensor fusion technology used at these stores reveal valuable information about consumers – what items are often picked up and put back, or viewed for a long time before purchasing? That intent data may be leveraged in Whole Foods to provide a differentiated customer experience, which is something everyone in the industry should follow and learn from. It will only aid Amazon’s determination to build the world’s best supply chain network.

All retailers, distributors and manufacturers must realize the importance of driving value through a connected supply chain. Amazon has done this by forging a connection between its website and physical stores, building out its own delivery fleet and constantly seeking out more efficient, faster ways to fulfill orders.

Most companies obviously lack the financial capital to replicate Amazon’s moves. However, everyone can invest in resources that allow them to forge a stronger connection with upstream and downstream partners. Maybe that means looking into new supplier enablement technology or a transportation management system or a better method for integrating your assorted supply chain technology.

Everyone must improve the visibility and connectivity of their supply chains to compete with Amazon. The insights gathered from Amazon’s purchase of Whole Foods will hopefully provide direction for all companies in pursuit of operational excellence and long-term growth.