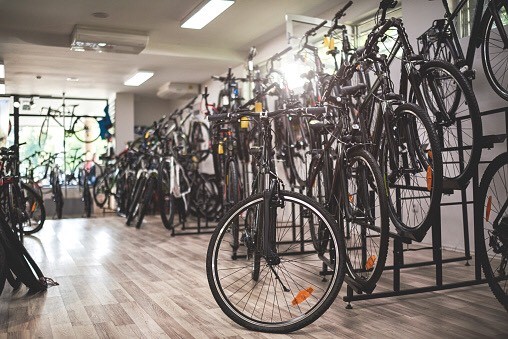 Quality Bicycle Products uses its employees’ insights to transform its supply chain. HighJump’s WMS technology has enabled the company to do so more effectively than ever.

Quality Bicycle Products (QBP) has always looked to maximize efficiency. Its founder, Steve Flagg, created a digital catalogue of his inventory shortly after entering business in 1981, enabling him to find and ship products the same day while most of his competitors spent much longer searching for parts.

A commitment to rapid fulfillment has defined QBP ever since. Over the decades, the company has grown from a one-man operation housed in Flagg’s garage in Minneapolis to a business of over 700 employees that drives more than $250 million annually in sales. From easily replaced spokes to hard-to-find cogs, QBP supplies specialty retailers with anything they might need on the shortest possible timelines.

“Our goal is to get to our customers in most major metropolitan areas within one day on the ground,” said QBP’s DC Systems Senior Business Analyst Tamara DeGarmo at HighJump Elevate 2018.

Of course, QBP’s competitors are also running at a breakneck pace: in recent years, the company has had to grapple with the continued rise of Amazon, which recently opened a distribution center just across the Mississippi River from QBP’s headquarters in Bloomington, Minnesota. With such formidable competition just a stone’s throw away, QBP needed to reexamine its distribution strategies and find ways to further streamline them — all while keeping valuable employees engaged.

Case Study: Quality Bicycle Products - Get the full story on this distributor's journey from homegrown WMS to new levels of productivity, efficiency, and profitability through a more flexible WMS.

Get the Case Study >>

The Times They Are A-Changin’

QBP installed HighJump warehouse management system (WMS) at the end of 2004 after relying on a paper ticket system for two decades. Many employees were initially reluctant to embrace the new WMS, but after eight months of training and supervision, they couldn’t imagine doing their jobs without it.

In addition to simplifying inventory control and order planning, HighJump WMS offers a degree of flexibility that’s helped QBP become the world’s largest supplier of bicycle parts and accessories. “The advantage with the HighJump system is its adaptability,” said Ron Bruns, an Application Developer for QBP. “Anytime the business comes to the IT department with a requested change, HighJump’s technology allows us to make it happen.”

Like any successful company, QBP is always searching for opportunities to improve its supply chain. Over the years, the leadership team has found that many of the best ideas come from employees in the warehouse, whose on-the-ground experience with the WMS allow them to make hawkeyed suggestions for improving operational efficiency. Some of these recommendations have been as simple as placing a computer closer to a supervisor’s station, while some have resulted in wide-reaching changes to entire workflow processes.

After initially struggling to give these valuable proposals the careful consideration they deserved, QBP began to develop a system to thoroughly vet each and every proposal — while also encouraging employees to become more closely involved in reviewing and implementing these changes.

The result was QBP’s Continuous Improvement Program, which the company launched in 2006. The program relies on a JIRA ticketing system through which employees can submit ideas regarding workflows — a system which DeGarmo compares to “a gigantic suggestion box.” The idea is then reviewed through a comprehensive process during which the employee who submitted the suggestion, is invited to present an ideal outcome of the proposed solution. After the vetting team identifies opportunities for improvement, and consults department stakeholders, the team then implements the changes in as practical a manner as possible while still adhering to the employee’s vision.

The process, according to DeGarmo, is driven by empathy. With every suggestion, QBP strives to place itself in the employee’s position, truly understand their challenges, and arrive at the best solution.

“We want to do what we can to keep our employees satisfied, and that involves being compassionate,” says DeGarmo.

The Continuous Improvement Program has been nothing short of a rousing success. In its current model year, which runs from July 1, 2017, to June 30, 2018, QBP has received 1,101 suggestions from employees — 588 of which have already been enacted. The company hoped that these suggestions would generate $3.25 million in “value” (that is, any gains that directly or indirectly contribute to the profitability of the company) by the end of the fiscal year; with more than three months left, QBP has already smashed that goal with $3.43 million generated.

In addition to these material gains, the Continuous Improvement Program has completely transformed QBP’s operations. Over the current model year alone, employee suggestions have decreased labor time by a whopping 4,731 hours and enabled 247,000 products to bypass the packing stage altogether. As a result, QBP’s distribution centers have been able to close nearly an hour earlier every day, and employees have had to work overtime far less often.

Just as importantly, this program has given QBP’s employees an opportunity to be heard and effect positive change on the entire company. After noticing that QBP used its proprietary boxes to complete warehouse transfers, for example, a worker in the Bloomington warehouse suggested that the company simply reuse boxes from its vendors instead. QBP quickly approved this change, and has saved 4,000 boxes in the year since the policy was implemented.

Similarly, on the recommendation of QBP’s director of distribution centers, the conveyor belt used in the company’s Bloomington warehouse was replaced with the batch cart picking system used at its other facilities — a decision that’s helped QBP to standardize its picking system companywide.

From swapping proprietary boxes with vendor boxes to reconfiguring the entire picking system, HighJump has helped QBP expand its business and connect with its employees. On a larger scale, it’s helped the company deliver on the commitment to efficiency on which QBP was founded.